These Paleo Vanilla Cupcakes are such a fun dessert! They are a blank canvas and are perfect for any occasion or holiday. In addition, these cupcakes are light, fluffy and easy to make. These grain free vanilla cupcakes use coconut flour to remain nut free. Because of that, they are great for kids! These cupcakes will become a new favorite!

BAKING SODA: The leavening agent in these cupcakes is just a teaspoon of baking soda.

EGGS: Four eggs are added to the cupcake batter to help them rise.

VANILLA: Both the cupcakes and frosting use vanilla extract.

COCONUT CREAM: Use the hardened part on top of the canned coconut cream for the frosting.

How to Make Paleo Vanilla Cupcakes

First, make vanilla frosting. Add all frosting ingredients (using only the hardened part of the coconut cream) to a stand mixer. Whip until light and fluffy. Refrigerate while cupcakes are being made.

Next, preheat oven to 350 degrees Fahrenheit and line a cupcake tin with cupcake liners.

In a large mixing bowl or KitchenAid, combine all cupcake ingredients.  Stir to combine.

Use a cookie scoop or spoon to add batter to cupcake liners. Fill about 3/4 of the way to the top.

Bake for 15 to 18 minutes or until just slightly golden on top and a toothpick inserted comes out clean. 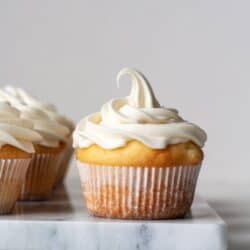 Get the Recipe: Paleo Vanilla Cupcakes

Other Cakes and Cupcakes: 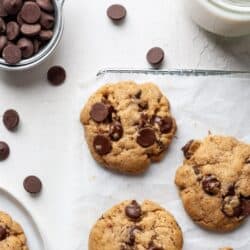