These are hands down the best Paleo brownies ever – gluten free or not!  They are incredibly rich and decadent.  These crinkle top brownies are surprisingly easy to make and they turn out extra fudgy and gooey every time.  Say goodbye to dry cake-like brownies and hello to your new favorite dessert!

These are the best brownies I’ve ever had. Here is why you will love them:

Use grass fed butter for a rich and smooth Fudgy Paleo brownie.  Substitute ghee for butter if desired. Coconut oil can be substituted for a dairy free option.

Coconut sugar and eggs are creamed together until light and fluffy.  In addition, coconut sugar is a popular Paleo granulated sweetener since it’s minimally processed and derived from coconuts. White sugar may be used in place of coconut sugar.

I swear by Enjoy Life Dark Chocolate Chips which are gluten free and dairy free.  Melted chocolate and butter lead to a fudgy brownie. Any lightly sweetened chocolate chips will work! These chocolate chips are my favorite, as evidenced in these Almond Flour Oatmeal Cookies.

Cocoa powder adds a hint of extra chocolate to these brownies.

Tapioca flour is the only “flour” used in these brownies, making them white flourless.  Moreover, it can be directly substituted with arrowroot powder or cornstarch (not Paleo). See my Guide to Gluten Free Flours and Baking for more information.

A sprinkle of sea salt takes these Paleo brownies to the next level!

Next, beat eggs and coconut sugar for 2 to 3 minutes in a stand mixer. Beat until light and frothy.

Then, melt butter and chocolate chips until smooth and creamy. Pour this mixture into the stand mixer and mix until just combined.

Next, sift cocoa powder and tapioca flour into the stand mixer.  Add vanilla and stir to combine. Fold in extra chocolate chips if desired.

Bake brownies for 15 minutes. Then remove from the oven and lightly bang pan on countertop 2 to 3 times.  To do this, lightly drop pan a couple of inches onto countertop (this evens out the batter and remove air bubbles).

Next, return brownies to the oven and bake an additional 10 to 12 minutes or until a toothpick inserted comes out clean.

In order to achieve that highly sought after crinkly top, beat the eggs and sugar for at least 2 to 3 minutes straight.

Additionally, when melting the butter and chocolate chips, continue stirring until completely smooth and creamy.  There should not be any chunks of butter or chocolate.

After the initial 15 minutes of baking time, remove from oven and simply pick up brownie pan with oven mitts and gently drop it about 2 inches on your counter.  Repeat two more times.  Doing this allows any air pockets to disappear and leads to a fudgy brownie!

Lastly, allow the Paleo brownies to cool completely.  If you’re in a rush, stick the pan in the fridge to speed up cooling time.

How does flour affect brownies?

Flour directly affects the density of texture of brownies. The less flour used, the more dense and fudgy these brownies will be. More flour equates to a cakey brownie.

What makes brownies fudgy versus cakey?

How do I thicken brownie batter without flour?

This brownie batter is thickened with tapioca flour, which is the same thing as cornstarch. Additionally, the melted chocolate chips and butter add a thick fudge texture.

What happens if you don’t put enough flour in brownies?

If you don’t put enough flour in brownies, they will be thin and runny.

What gives brownies a crackly top?

Brownies get a crackly top from the beating of the eggs and sugar.

Why don’t my brownies have a crust on top?

Brownies that don’t have a crust on top have not been beaten enough. Beat eggs and sugar until light and frothy.

What is the secret to good brownies?

The secret to good brownies is the melted chocolate and butter. This makes brownies extra fudge like, rich and decadent.

How do I cut brownies?

Cut brownies once they are completely cooled. For best results, use a plastic knife.

If you make this Paleo brownies recipe, I would love to see it! You can find me on Instagram, Facebook, and Pinterest. I would love for you to follow along! For more healthy dessert ideas, check out my Dessert recipes page. 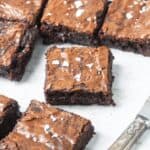 Get the Recipe: Paleo Brownies

These are hands down the best Paleo Brownies! They have that signature crinkle top, a super fudgy texture and they're filled with dark chocolate. Pair with a glass of almond milk for the perfect dessert!
4.99 from 68 votes
Print Recipe Pin Recipe

Love these Paleo brownies? You can sign up here to receive healthy meal plans and new recipes!