These Paleo Pecan Pie Bars have all the traditional flavors of a pecan pie but they are so easy!  In addition, these bars are much more convenient and quicker than a pie.  They’re great for any time of the year but I especially love them around Thanksgiving and Easter.  I always make my Paleo Pumpkin Pie and these for the holidays!

ALMOND FLOUR: Almond flour is a common Paleo and gluten free baking flour. In these pecan pie bars, it is the base of the shortbread layer.

PURE MAPLE SYRUP: Maple syrup is used to sweeten both the shortbread layer and the pecan pie filling. A high quality pure maple syrup makes a huge different in taste! In addition, honey can be substituted.

EGG: The shortbread layer uses an egg to help it rise while baking. In addition, it helps give the crust layer a great texture.

BUTTER OR GHEE: Grass fed butter or ghee is used in both layers. Coconut oil can be substituted, but I suggest using butter for its signature flavor.

COCONUT SUGAR: Coconut sugar is a popular Paleo granulated sweetener. It is significantly less processed than white sugar. In these Paleo Pecan Pie Bars, it i used in both layers.

ALMOND MILK: A little bit of almond milk helps smooth out the filling.

Check out this Gluten Free Graham Cracker Crust for another fun Thanksgiving recipe!

First, preheat oven to 350 degrees Fahrenheit and line an 8 inch by 8 inch pan with parchment paper.

Combine the crust ingredients in a large mixing bowl.  Then, press this dough into an even layer in the bottom of the pan.

Bake for 10 to 11 minutes or until the crust has just started to turn a light golden color.

Bring to a light simmer and simmer for 5 to 6 minutes or until mixture has started to thicken.  Mix in pecans and gently stir to combine.

Once crust has baked, pour this pecan layer down into the pan.  Bake for 25 to 27 minutes or until the middle is set.

Finally, remove from oven. Cool completely before slicing into. Garnish with sea salt if desired.

Press the crust into an even layer before baking. This ensures even baking.

When making the pecan pie filling, cook until thickened but not burned. Lower heat to thicken if necessary.

Watch the pecan pie bars while baking. Since they contain maple syrup, they are more prone to burning.

Add a piece of aluminum foil over the bars while baking if needed.

These Paleo Pecan Pie Bars are such a fun dessert!  The crust is buttery and delicious.  The pecan filling is sweet, salty and crunchy.  Pecan pie is usually associated with the holidays but these are one of my favorite non-chocolate desserts.  They’re sure to be a hit with your family and friends too! For more fun holiday ideas, check out this Gluten Free Puff Pastry and these Chocolate Covered Pecans. 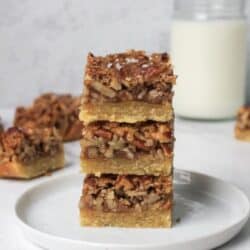 These Paleo Pecan Pie Bars have all the traditional flavors of a pecan pie but they are super easy! An almond flour shortbread is topped with a sticky sweet pecan filling. These gluten free bars are great for any time of the year!
3 from 2 votes
Print Recipe Pin Recipe