This Gluten Free Pear Crisp has a sweet pear filling and a crumbly crunchy crisp topping! This recipe can be made on the stovetop or in an oven. Either way, it is pure comfort food!

This post is sponsored by Octonuts. I only work with brands I truly love. Thank you for supporting my blog!

This Gluten Free Pear Crisp has a soft and tender filling and the best topping! Here is why you’ll love it:

Bartlett: Bartlett pears are very naturally sweet and soft. They are great in cobblers, crisps and crumbles because they become even sweeter and softer when baking. I used Bartlett pears in this crisp.

Green Anjou: Green Anjou pears are moderately sweet and soft. They are slightly more crisp than Bartlett pears, but they are a great option for baking.

Red Anjou: Red Anjou are very similar to Green Anjou, but they are red in color. In addition, they are great for baking.

Bosc: Bosc pears are much less sweet. They are more crispy than other pears. These pears are great for poaching or baking in recipes where they maintain their shape.

For this recipe, Bartlett or Anjou pears work best. They are easy to peel, naturally very sweet and juicy, and great for pear crisp.

Then, make the crisp topping. Add all topping ingredients to a mixing bowl. Use your fingers or a fork to incorporate the cold butter into dough.

Once a crumbly dough has formed, add to skillet.

Cook for 7 to 8 minutes or until crispy. Stir frequently to prevent burning. Then, remove to a plate.

Next, add peeled and sliced pears, tapioca flour, cinnamon and coconut sugar to a mixing bowl. Toss until pears are fully coated.

Add 1 tablespoon butter into skillet. Then, add pear mixture. Cook for 7 to 8 minutes or until pears are softened. Stir occasionally to prevent burning.

Once pears are softened, sprinkle topping onto pears. Cook for 1 to 2 minutes or until warmed through.

How To Make in Oven

To make this recipe in an oven:

How do I know when pears are ripe?

To check if pears are ripe, apply slight pressure near the stem of a pear. If it slightly gives, then it is ripe.

What can I make with lots of pears?

I’m glad you asked! This pear crisp uses about 5 to 6 pears.

Does pear crisp need to be refrigerated?

Can I use apples instead of pears?

Sure! Since apples aren’t as soft as pears, the cooking time will increase. An apple crisp in the oven takes about 40 to 45 minutes. Check out my Paleo Vegan Apple Crisp!

Can pear crisp be frozen?

I would not suggest freezing pear crisp. The pears will not do well when thawed.

How do I store leftovers?

Store leftovers in an airtight container in the fridge for up to 4 days.

What can I use instead of walnut flour or powder?

Blended walnuts (into a powder form) can replace the walnut flour. Another option is to use 3/4 cups almond flour instead of the 1/2 cup walnut flour. I used this Octonuts Walnut Protein Powder in this recipe!

If you make this recipe, I would love to see it! You can find me on Instagram, Facebook, and Pinterest. I would love for you to follow along! For more Gluten Free recipes, see my Gluten Free Recipes page. 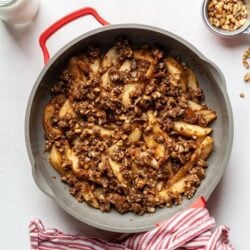 This Gluten Free Pear Crisp has sweet and tender pears and a crunchy topping! This recipe can be made in either the oven or on the stovetop. It is such a great healthy and cozy dessert!
5 from 1 vote
Print Recipe Pin Recipe

Have you signed up for my free newsletter? You can sign up here to receive healthy meal plans and new recipes!